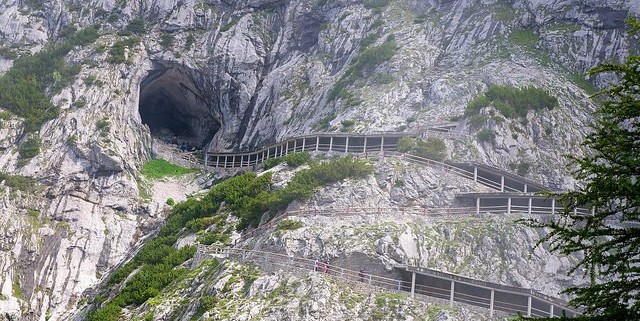 High above the village of Werfen in Austria lies the “World of the Ice Giants,” the ice cave which is considered to be the largest of its kind in the world. Eisriesenwelt is a natural limestone ice empire which is 26 miles (42 km) long and is one of the most visited places in Austria.

Before 1879, the cave was known only to locals, who, because of the shape of the entry, believed that it was the entrance of Hell.

Officially, the caves were discovered in 1879 by an Austrian natural scientist named Anton Posselt. One of the few people who remembered Posselt’s discovery was Alexander von Mork, a speleologist from Salzburg who led several expeditions into the ice caves in 1912.

A cabin (Forscherhütte) for the explorers was built in 1920 and that is when the first tracks up the mountain to the caves were built. Another cabin was built later, called the Dr. Oedl House, and that is when paths from Werfen and Tänneck were constructed. Today, the Eisriesenwelt cave is visited by around 200, 000 tourists every year.

Before visitors head into the caves for the 75 minute guided tour, lamps are handed to them. Only one part of the more than twenty miles of caves is open to the public rich with magnificent ice formations. The Posselt Hall is the first stop of the tour, with the beautiful Posselt Tower stalagmite.

Next is the Great Ice Embankment which is a massive formation built up over 75 feet. Visitors can also see Hymir castle, the enormous ice sculpture dedicated to the ice giant of the Edda from the oldest Germanic saga. On this particular spot, stalactites create a formation called Grigg’s Vell which is also called the Ice Organ.

Every spring there are new ice formations visible inside the caves because of the melted water that seeps through the cracks in the rock. Geologists claim that the cave was first formed by the Salzach river, which eroded passageways into the mountain. Only the first half mile of the cave is covered with ice and the other 41 are formed of limestone.

The temperature inside the cave is below freezing so before entering the cave visitors should wear warm clothing. Everything in the cave is so magical that sometimes is hard to believe that this ice empire was formed by nature.